New Andy Saunders’ The Art of Kustom opens at Beaulieu 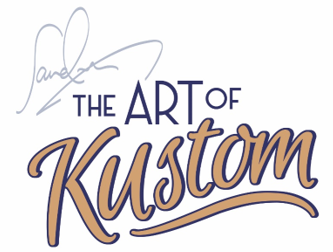 Beaulieu is proud to announce the launch of its brand new summer exhibition The Art of Kustom featuring incredible creations from the imagination of car customiser Andy Saunders.

Visitors to the National Motor Museum can catch a first glimpse of the new exhibition at a launch on Father’s Day’s Hot Rod & Custom Drive-In Day on Sunday June 17th 2018, when Andy will drive one of his stunning machines around the grounds of the attraction. The full showcase of Andy’s most famous jaw-dropping creations will be on show inside the museum until September 2018.

Andy – described as an artist using cars as his canvas and one of the best known customised cars builders this side of the Atlantic – will unveil his new project Metropolis as part of the exhibition. The 1939 Peugeot 202 pick-up has been transformed from a rusty wreck into an art deco-style stunner, in the latest of more than 50 of Andy’s car projects.

Discovered in a field in France three years ago, it is believed to have been requisitioned by the invading forces during World War II. Andy has worked his magic on the ruined bodywork, widening the body which has been lowered over replacement underpinnings, and transforming it into a sleek retro delivery vehicle.

A riot of outrageous styling cues, awesome colour schemes and off-the-wall ideas, The Art of Kustom has been gathered from private collections across Europe. It includes the 1930s splendour of Andy’s immaculate Cord, a Citroen that looks like a spaceship, Reliant Rialto race car, road-going speedboat and the world’s shortest Mini, which is one of Andy’s most famous cars from his 40-year career:

Newly restored to join the exhibition is drastically shortened 1964 Mini Ha Ha, which will be on show for the first time since it went on display in the 1980s. Its new owner has worked hard to return the car to its original prime of more than 30 years ago. Andy came up with the original concept while still at school, before building the car on a shoestring budget when he was just 20-years-old. It became his everyday car when he first completed it – and was ideal for doing wheelies in reverse!

Tetanus is one of Andy’s most widely acclaimed projects, taking 14 years to complete. This 1937 Cord 812 Westchester is another rarely seen machine that was in appalling condition when Andy found it, having spent more than half a century decaying in a Yorkshire field. Andy’s friend accidentally christened the crusty car when he declared ‘I’m not touching that without a tetanus shot!’

Tetanus was inspired by a stylish car illustration that Andy saw on a birthday card. To produce the streamlined two-door coupe, the wings were widened and reworked, the roof was lowered and shortened, doors were lengthened and the rear end built from scratch using sections from a Jaguar MkII and VW Beetle. With a sumptuously trimmed red cockpit and Chevrolet V8 engine under the bonnet, this beauty is a real crowd-pleaser.

Eye-catching for very different reasons is Indecision. With its huge rear wings and sloping roofline, it might look like a spacecraft but is in fact a 1976 Citroen CX. Andy let his imagination run riot with this project early in his custom car career but its daring bodywork was a challenge to build. The Citroen’s self-levelling suspension complements the space-age look, while a heart-shaped bed has been fitted inside the car’s tail. Now in a private collection, Andy refreshed the car in 2004, with its current silver colour scheme.

Even wackier is Run A Ground. Passers-by may not be able to believe their eyes but this speedboat is more at home on dry land than in water. Using the chassis and running gear of a 1971 Reliant Regal as his starting point, Andy adapted a Monbar 146 speedboat fibreglass body before uniting the two. Run A Ground was a familiar sight around Andy’s seaside home town of Poole in Dorset for 10 years, before it joined a private collection.

Saline Warrior also started life as a three-wheeled economy car, took just two days to build and went on to become a race car on the famous Bonneville Salt Flats. Andy was tasked with adapting a 1989 Reliant Rialto to win a drag race while filming for BBC Panic Mechanics and his solution was to emulate the aerodynamic appearance of a classic salt lake racer, with a lowered roofline, lengthened nose cone and smooth wheel discs. With the addition of a turbocharger, the unlikely racer was victorious. In the hands of French speed enthusiasts Les Triplettes de Bonneville, the Reliant was later modified with a 750cc Suzuki motorcycle engine and, put to the test in the annual Bonneville Speed Week, achieved 150mph.

A subtler-looking car is Hesperus, a 1930s Hudson that was built as a British street rod in the 1960s and was remarkably rust-free when the project began. Its restoration to concourse standard has taken six years, without yet finishing the interior trim.

The Art of Kustom can be seen as part of standard admission to Beaulieu, which includes entrance to the National Motor Museum, World of Top Gear, On Screen Cars, the ancestral Montagu family home of Palace House, 13th century Beaulieu Abbey and the stunning grounds and gardens. To buy tickets in advance online or for more information see www.beaulieu.co.uk or call 01590 612345.

“Despite being something of a legend andy remains completely approachable with his feet firmly planted on the ground but what really matters though is the quality of his work and this is another of his strong points, he can create just about anything.”
Richard Dredge MSN Freelance Journo

“Saunders creations are whacky, occasionally one step beyond ridiculous and arguably more spectacular than anything you’ll ever see. He is Englands most colourful and imaginative car designer.”
Ewan Page. Australian Journo

“The spirit of such genius as George Barris and Ed Roth is alive and living in Bournemouth.”
Tony Beadle

“The irrepressible Andy Saunders does it again.”
Keith Sueme. Editor of Custom Car